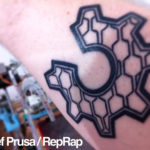 So today is the day. I’ve wanted to write about this for a long time now. Some of you may know, some may not, but I started my own RepRap company. It’s called Prusa Research, maybe it is the first open hardware based company in the Czech Republic, but certainly not the first worldwide. There are many companies/projects doing that very well, for example, Arduino (I’m so grateful that thanks to RepRap I can now call Massimo my friend. I started doing hardware because of Arduino), Adafruit, Sparkfun, etc.

RepRap and especially 3D printing is now full of bullshit, this is true. There are so many new companies that are being created these days. Most of the guys haven’t contributed a single thing and yet they call themselves inventors :-(, but enough trolling. I’ve been in the RepRap community for a very long time by todays standards and helped to spread it a lot. Prusa Mendel is probably the most wide spread 3D printer on the Earth :-). I do have different position when I want to dive in then others, I have a lot to lose if I do it wrong. Since I applied for my business license (dunno how to call it in english) I thought of a way how to keep myself from doing any bullshit marketing and do it right. Trust me, sometimes it’s very tempting to claim stuff you haven’t done or isn’t true? Like “Hey, my printer can print at 50 micron resolution!” LOL. I designed a bad ass tattoo to help me with that. It’s Open Hardware logo with standard RepRap infill inside. It’s on my right forearm, everyone can see it when I shake their hand, when we meet or sign a deal, it doesn’t matter. It has a great deal of symbolism for me. Open Hardware and RepRap got me where I am. If you are starting with Open Hardware, don’t be afraid to do it right, you can still succeed. What finally motivated me to write this article is a something very sad that happened today. Makerbot turned closed source, or at least all the signals lead to it. Makerbot was started by one of the RepRap core developers, Zach Smith, Bre Pettis and Adam Mayer. Adrian Bowyer, founder of the RepRap Project, gave them some cash along with others to start. Makerbot is based on RepRap, and they weren’t ashamed about it. That started to change and Makerbot started to distance itself. When I gave talks about RepRap people started to accuse me of ripping off Makerbot. I was like WTF! I even exchanged a few emails with Bre. I still saw Makerbot as a powerful friend on Open Hardware field, as a shield which will get the potential law suits by big 3D print companies sorted out.

Bre was giving keynote last year on Open Hardware Summit, etc etc. Company that shows to others that the Open Source way is possible. Even though I grind my teeth about the PR which make it seem like they invented the thing, see this crap Makerbot invented stepper extruder 😀 They even did a nice vid about Open Hardware

Later on they got some $10M of funding. And things started to change in the background. Just recently they did one Open Hardware achievement, with Tangibot, clone of Replicator on Kickstarter (google it if you want to know more) where community totally crashed the clone and prove that they do not need any closed source bullshit to succeed.
But surprise, surprise, we now have a Replicator 2 and it is closed source. Hey look, we took all your improvements you shared on thingiverse, compiled it into one package and closed it for you :-D. Same with MakerWare. (They finally, after several years, stopped using Skeinforge, software done by Brazilian who doesn’t even have a printer :-D)

And you know what is the biggest, sneaky move? Not mentioning it while they announced it. My guess is, that they will mention it when first pre-orders ship out. Which is after OPEN HARDWARE Summit where Bre gives a talk (I wonder about what, lol) and Makerfaire and all magazines writes about them as Open Hardware heroes :-D. That is the sickest move. I had to call their support and ask them directly. I got the answer, that Replicator 2 is closed source. Call them yourself, I wonder if the guys already got instructions to bluff :-D? +1-347-334-6800
I asked on their facebook page, asked Bre directly and tried to ask some other employees but didn’t get any answer. If it’s Open, why don’t they say it, right?

Hi Bre,
we know each other for some time. I want to ask you about the Replicator 2, and if it’s closed source? If so, then why? I would also love to shoot an interview with you for my RepRap interviews show on youtube, I promise I will be neutral. But you have to explain weird behavior I wrote about in the linked article.

EDIT: OMG and look at http://www.thingiverse.com/legal Looks like I’m going to pull down all my stuff from Thingiverse … I feel very sorry that I have to rant this way, but this makes me really sad!

Bre released statement  here http://www.makerbot.com/blog/2012/09/20/fixing-misinformation-with-information/. Basically saying „We might be open or might be not.“ I don’t know how you can already sell stuff to ppl you are not sure about license. I get a big NO from that statement 🙁

Zachary Smith, one of the Makerbot original founders, published an article about this incident. He is concerned about Makerbot future. Even to the point that he added sad kitty picture to the post! http://www.hoektronics.com/2012/09/21/makerbot-and-open-source-a-founder-perspective/

As I’m going deeper, I find more and more interesting stuff. Did you know that Makerbot has patent? Surprise for me too 😐 Automated build platform. Idea pitched year before patenting by Adrian on RepRap blog? Continuous belt production.

Well in the meantime I looked at MakerWare if it can be made to work with older Makerbots. It turned out it is possible and ridiculously simple. Adding support officially would  take minutes. But It seems noone want’s you to see that. Makerbot had to buy commercial Qt license (if they didn’t they are violating Qt license) to be able to make MakerWare closed source. Qt is library for making user interface. I’m starting to think, that closed source is not misinformation but was planned for some time. But this is a speculation and my personal feeling. (UPDATE: Official support should come „soon“ according to http://www.makerbot.com/docs/makerware/use/)

Check out my video how to use MakerWare with Thing-o-matic and Cupcake.

New statement released by Makerbot. Saying „What was open stays open, new stuff will be close.“ Which is what we expected as the worst case. And we were completely right with our predictions.

Why? Mighty Board is one board version of Arduino + Ramps + Pololu RepRap electronics. So don’t get angry on someone who did same thing as you. And their super cool extruder is a copycat of UP! Chinese 3D printer I’ve got that even confirmed from one of the employees last year at Makerfaire. Whooops 😉

We still have no statement on the patent they have on Heated Conveyor Belt  looking very very similar to stuff posted on RepRap blog.

We still have no statement on the reason why they didn’t announce this information during launch.

We just got bold statements how their printers are the best …